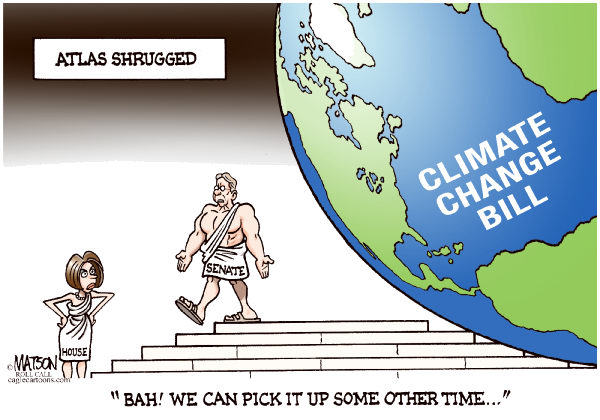 Trust a politician with your home and …
(c) R J Matson, Cagle Cartoons

Two down, one more to go. The score – Obama:1, Romney:1, our future: 0. After watching the second debate in a series of empty promises, political weaselry and some downright childish whining, I am certain any concerned voter would have serious reservations. And while the two candidates jabbed, parried and danced around the usual suspects – jobs, outsourcing, taxes and immigration- no one wanted to talk about the very real effects of climate change that America is experiencing in recent years. This year’s drought, the worst in two decades or more, affected nearly 80% of all agricultural land, driving up food prices and pushing small farmers to the brink of collapse. Dry areas of the country, notably the Southwest, are facing fresh water shortages that will only be exacerbated over time. Eastern states are still dealing with the effects of Hurricane Irene, one year after it killed 67 people and caused nearly $50 billion-worth of property damage. And the problems are not just state-side. As the rest of the world enters a new era of scarcity, extreme weather and ensuing poverty, global peace and stability cannot be taken for granted forever. The worst failing this year was the washout-that-was Rio+20, a mega-conference of world leaders with nothing concrete to show for the time spent. This is why I am frustrated by the games politicians play on-screen and off. Why is our future being held ransom by these peddlers of flimflam?

A big part of the problem is the inherent short-sightedness of politicians. They only see as far as their elected term and immediate issues like jobs dominant their landscape. The more vicious problem is the politicization of issues surrounding climate change and sustainability in recent times. There is now a clear divide between liberals and conservatives on green issues, with the more extreme right-wingers terming sustainable development to be a vast conspiracy (Agenda 21, anyone?). In the course of this campaign, once-moderate Romney was forced to pander to the fringes of the GOP and Obama touches on environmental subjects with the nimbleness of a hot-coal walker. Conservatives are beginning to view sustainability as anti-liberty, anti-jobs and somehow un-American. How did sustainable development become as controversial as abortion or gay rights?

One explanation is offered by Dan Kahan, a decision scientist at Yale Law. His research suggests that people are deeply polarized over scientific findings that threaten the status quo and impact ‘the ways things are done here’. Climate change science, for instance, points out that reductions in fossil fuel emissions are essential to keeping temperatures stable in the future. For economies like America, that would essentially mean changing a way of life that revolves around gasoline and coal. That is a 150 years of doing things one way, a seeming good way. It is easier to demonize the science and find ways to disprove it than to contemplate a complete overhaul of an economy. Unfortunately, this inherent resistance to change has been worsened by the message sent out by sustainability proponents over the years. A emphasis on doom & gloom scenarios for the environment, compounded by shaming campaign against polluters, has made the opposition dig in its heels deeper. Our chance to create a livable future for all is hopelessly gridlocked in the political arena.

Thankfully, we don’t always rely on politicians to get things done. Sustainability efforts are spearheaded today by non-profits, citizen groups and increasingly, the private sector. One beacon of hope is that local politics does not always reflect national problems and many local governments recognize the urgency of sustainability efforts in their constituencies. Yet a number of these organizations, whether they are city councils or grassroots groups, find it prudent to highlight other gains that occur as a by-product of sustainable growth. The focus is on jobs, community health, economic gains, even nostalgia for good ol’ times. A large part of this is driven by the fear of politicization and the subsequent alienation of some sections of the community. This has to change. We need universal participation if we want to bring about change in a short time frame. How do we then depolarize sustainable development and engage American citizens across the political spectrum?

One solution: Go back to the basics. Values that are deeply American, that appeal to people regardless of their political afflictions, could hold the key to talking about sustainability and driving change. Some of these qualities, like self-reliance, responsibility, innovation and entrepreneurship, could be used to build consensus over what has become a deeply dividing issue. Let us look at three such values sets and what they could mean for sustainability campaigns.

1. Self-reliance and Self-sufficiency:  A key component of sustainability is flourishing local economies. Buying and selling locally, keeping production within the community and helping neighbors grow can be linked to the All-American attitude of self-reliance and self-sufficiency. To do this successfully, these concepts have to be linked to the local community as a whole, in place of the traditional individualistic motto.

2. Innovation, Creativity and Entrepreneurship: Sustainable living requires whole new ways to work, eat, live and play. It is a challenge and no self-respecting American can say no to the opportunities to dream up tomorrow. Unfortunately, sustainability has always been presented as a guilt-inducing problem and not as a way to re-imagine civilization. By showcasing the endless opportunities a new way of life presents, it is possible to get the best and brightest all fired up to change the world.

3. Responsibility and Accountability: The feeling of responsibility towards one’s family, nation and God is ingrained in the American psyche. The belief that we owe our children a better future goes even deeper. The thought that future generations will hold us accountable for our actions today is a fantastic motivator to do the right thing. Who wants to look into their children’s eyes and say “We messed up”? Many of us would quail at the thought. Working to create  livable tomorrow for our children is a powerful way to bring people of all political shades together.

Now, if only I could get either presidential candidate to listen.

For an in-depth analysis of politics and sustainability, do take a look at articles by  Steve Cohen, Director of the Earth Institute at Columbia University.